“Prophets Don’t Honk” by Larry Gibbons of Middle River in Victoria County, is one of 32 titles on the long list and the only Atlantic Canadian selection.    Thousands of submissions were received for this year’s competition, run by CBC Radio and partners, the Canada Council for the Arts, Air Canada’s enRoute magazine, and The Banff Centre.

See here for the rest of the article:  http://www.capebretonpost.com/Arts/Entertainment/2013-03-01/article-3187572/Cape-Breton-writer-in-running-for-short-story-prize/1

White Eyes  in the Inverness Oran

White Eyes, a new collection of short stories from Breton Books, offers a look into a unique slice of Cape Breton life. It will be launched today at 7:00 p.m. at the MacConnell Library in Sydney.

Author Larry Gibbons drew on his experience as a white man who fell in love with a Mi’kmaq woman and lived on a reservation in Cape Breton for ten years.

“It is wonderful to be still knocked out by a new writer,” said publisher Ron Caplan. He said one reason he was driven to publish this book because “these stories open for us a world within the Cape Breton world that we too often miss.”

He pointed out that Gibbons went to the First Nations community not as a researcher or a social worker, but simply as a person. Reserve life showed Gibbons a new world that challenged his own values and opened rare possibilities.

Author Sheldon Currie has described the book as full of “wonderful stories – funny warm and sensitive” about “a clash of cultures.” As a white man, Gibbons often had what noted Mi’kmaq linguist Bernie Francis calls “a helluva time understanding reserve life.” The 16 stories in White Eyes take the reader on a journey that Caplan said is “respectful, compassionate, often comic and absolutely unique.

For the rest of the review, go here: http://oran.ca/entertainment.asp?id=789 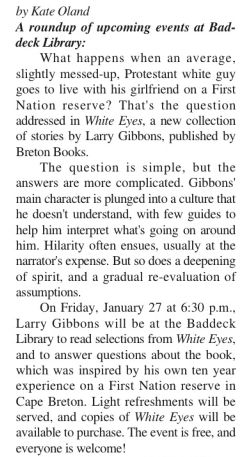 This was published in Kate Oland’s BOOK NOOK column in The Victoria Standard, Jan. 23-Feb. 5, 2012.  Kate is the librarian of the Baddeck Branch of the Cape Breton Regional Library.

Kate provides an abundance of remarkable  support to local authors.  She organizes  writing groups and encourages the writers in them. She provides a warm, welcoming space for authors’ readings and book signings, which, of course, she also  publicizes in the local paper.  She also manages to produce oat cakes and tea for these events.  And needless to say, she  makes sure that all books by local authors are on the library shelves.

Kate is a gem. Most everybody in this area knows that. It is possible that not everyone realizes that she is also an amazing singer, but if they didn’t know before, they do now.  She demonstrated that talent this month, when she and Bill Conall sang together at a concert held in Baddeck to raise funds for the local hospice.


White Eyes is available at bookstores, as well as at many gift shops in Cape Breton,  or may be ordered online at capebretonbooks.com
Powered by